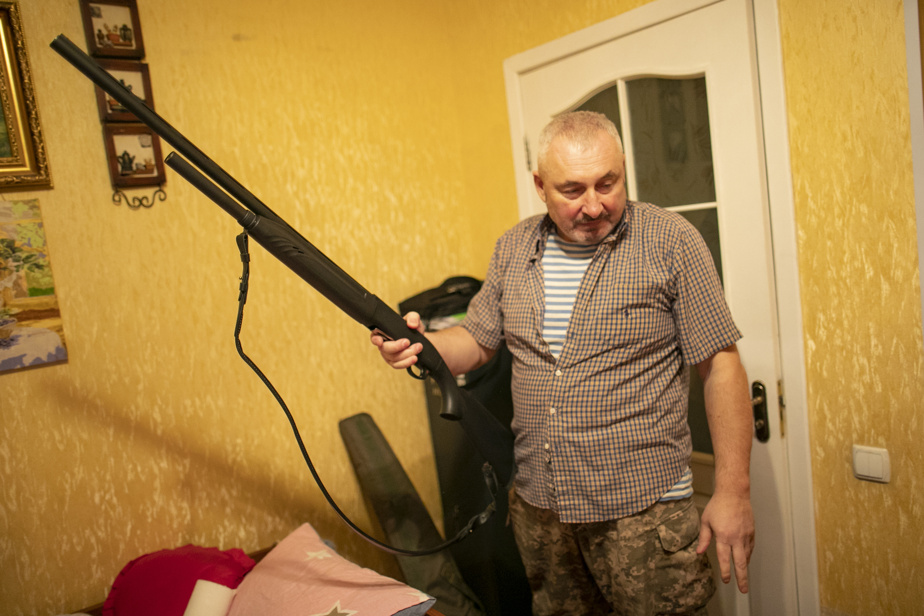 (Kiev) has seen others like Constantine. When asked if he was concerned about the 100,000 Russian troops concentrated on the border with Ukraine these days, he bent down and picked up a large gun. “I have a weapon to welcome the Russians here,” he says, looking out the window of his small apartment with a bird’s view of the Ukrainian capital.

In one corner of the shelter, the 58-year-old veteran also has a backpack with some personal effects. His wife is ready to go abroad as soon as the situation worsens.

“If war breaks out, the Russians will be very close to Kiev. If they do not take me to the military post, I will stay home and wait for the Russians to shoot me. If they find me at home, they will kill me because I was at war,” he said.

Constantine’s speech is no exception. Everywhere on the streets of Kiev, a sense of patriotism was pumped. Ukraine first lost Crimea, which fell to Russia in 2014. Later that year an armed uprising with the support of Moscow in the east of the country provoked bloody fighting. Today, with the deployment of Russian troops, many Ukrainians say they are ready to fight.

“It would be very difficult if the Russians came here because everyone would take up arms,” ​​says the fifty-year-old. His wife, who was sitting on his bed, nodded approvingly.

I understand that the Russians are ordinary people, but when they start occupying our country, I do not think about them. I think of the Ukrainian people.

According to him, this is a change of attitude and political outlook, which has been evolving over the years. This explains how the two fraternal nations slowly moved in opposite directions.

For many generations his family had excellent relations with Russia’s neighbors. Constantine’s Paul’s grandfather died in 1943 during World War II, when he joined the ranks of the Soviet Union against the Nazis. Ukraine was then part of the Soviet Union just like Russia. Like Constantine he served in the Soviet army for two years during his youth.

After the collapse of the Soviet Union, Ukraine gradually moved closer to the United States and NATO, which was seen as a direct threat by Vladimir Putin’s regime.

Today, some members of Constantine Paul’s family live in Russia, but can not speak to them. He finds that the anti-Ukrainian campaign is rife.

Once fluent in Russian, he now speaks only Ukrainian. “I am a nationalist,” he insists. In his hand, in large letters, he tattooed the quote of the famous Kozak warrior Ivan Zirkov, a kind of Ukrainian folk hero: “Slaves do not enter paradise! ⁇

In 2017, Constantine Bole quit his job at a socks factory and volunteered to serve as first aid in the occasional fighting area with Russian-backed armed separatists by the Ukrainian military. He had brought his own gun. A few months later, he volunteered to become a soldier. He fought, and many of his friends were wounded or killed.

One day, a 152mm artillery shell exploded very close to him. He later suffered from heart problems, which required surgery, and suffered from post-traumatic stress disorder. He is currently disabled and receiving a government pension.

He still wants to pick up his uniform, and the medals sound like bells as he moves. “It’s sad that I do not have the health to join the army anymore,” he says.

A short distance away, in the historic center of Kiev, policewoman Olga Staziuk delivers a similar speech. “If war breaks out, we will win, because everyone will defend the country. And the police!”

I will not leave, we will do everything to defend our country.

The mother of a 3-year-old girl, however, believes people should be quiet. “The only war in Ukraine right now is the information war. Russia wants to sow panic and destabilize the country through propaganda,” he says.

Ols Chanin, he is worried, but optimistic.

“Putin does not just want part of Ukraine, he wants the whole country, in my opinion. And he wants to change the European system,” he said in an interview with the filmmaker and director of several successful Ukrainian films. Press On the streets of Kiev.

I am not afraid, because the security of Ukraine is not only the responsibility of the military, but also of all the people who can take up arms and defend it. People do not think about what will happen if they lose. Think success.

Valentina Laverndevna serves as an aide to the monument erected in 2014 on Independence Square (Maidan) during the uprising against pro-Russian President Viktor Yanukovych.

She is retiring after retiring from the electronics factory, but still has to work here. During the war she cared for her grandchildren, but not for herself.

I am 61 years old and I am not afraid to die. If a war happens, I will go to the basement.

She said nothing negative about Russia’s neighbors. She has fond memories of when Russia and Ukraine were brothers in the Soviet Union.

“I had a very happy childhood in the Soviet Union. Today the children are all standing in front of the computer.” She began to walk away and resigned.

“Things are always getting worse and worse,” he complains.